Steve DeWitt is back with a different day trading scam. On September 2, 2016, TradingSchools.club printed a highly negative article that exposed Steve DeWitt as a complete and total fraud.

Predictably, Steve DeWitt quickly shut down the fraudulent website and scurried away, only to immediately reappear with yet another’get rich quick’ trading website named YourTradingDay.com. This latest website is part of a long and sad list of now-defunct websites and’get rich fast’ trading strategies.

Along with selling a fake live trading room, Steve DeWitt is also sharply selling a direct investment program varying in investment size $2k-$20k. This”investment plan’ is nothing more than a pyramid scheme where new investors pay off elderly investors.

Thanks for reading today’s review of Your Trading Day

In the TradingSchools.club original article, we highlighted several allegations of fraud which include:

As you can read, the original review was devastating and borderline hilarious. The outrageousness of this con artist and professional grifter is on the outer limits. 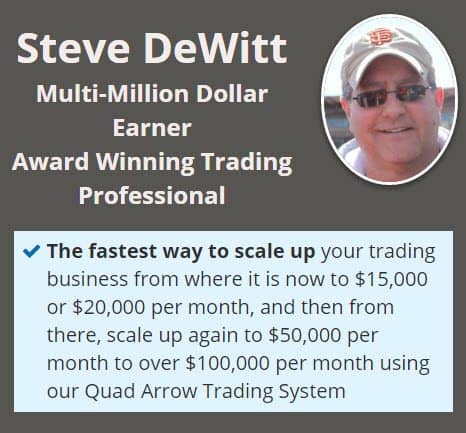 Predictably, after the review was published, and Steve DeWitt was outed for being a fraud and a phony…the SmartMoneyRoom.com website vanished like a fart in the wind. And of course, the email inbox of TradingSchools.club filled up with people complaining that they had been defrauded. So what does Steve DeWitt do next? You guessed it, yet another trading website named YourTradingDay.com.

Your Trading Day is the same of old soup for con-artist, Steve Dewitt. Simply pay him a monthly fee of $297 and he gives you his ‘magical’ trading indicators. Then you simply log into his live day trading room and copy his trades. Easy money. Everyone is getting rich. Just copy and paste his supposed trades. All of your money troubles are now over. Of course, it all sounds so nice and easy. The following video is the most recent promotional video…

However, once people pay the monthly fee, and begin trading with a real money account, they begin to realize that something odd is happening. He is mysteriously exiting trades in which he never called an entry. Losing trades are conveniently forgotten about. The daily recap is stuffed with all sorts of ‘mystery meat’ trades that never occurred.

The reoccurring narrative from victims is that they usually stick around for 2 months before they begin to realize that the guy is a fraud and they got suckered into paying a con artist $297 per month for useless ‘trading signals’.

Of course, every good con artist needs a few extra tricks in which to scam his victims for even more money. And Steve DeWitt operates without exception. For when he is not ripping off people with his fake day trading room, he is also operating a pyramid scheme on the side. Trying to convince the poor suckers that paid him $295 per month to next invest in an outrageously fraudulent pyramid scheme named The Eight Figure Dream Lifestyle. The promo page can be found here.

The cost of The Eight Figure Dream Lifestyle pyramid scheme? Steve is accepting investments of between $2k to over $20k per person. And what exactly is The Eight Figure Dream Lifestyle selling? They have no products. Most pyramid schemes will typically have some sort of dietary supplement, cleaning supplies, skin cream or magic potion in which every is scrambling to sell down the pyramid to their parents, family, and friends. But with Steve’s ‘get rich quick’ pyramid scheme, he just said to himself, “Ah fuck it, who needs products, just sell the pyramid.”

God bless you for making it through this nonsense promotional video. I felt grimy and needing a shower. But the best part is after the video when Steve DeWitt starts to talk about how his customers are making upwards of $60k to $100k per month without having to lift a finger. All you have to do is make an initial investment. And the larger the initial investment, the larger the monthly payday.

Steve DeWitt markets this pyramid scheme as a truly hands-off money making investment opportunity. Just pay him the money and he has a ‘guaranteed system’ that automatically finds new customers and fills in the area below your pyramid.

Ok Steve, what method are you using to find the next several layers of suckers to build these grand pyramids? Glad you asked. Apparently, the preferred method is by telephone autodialer and recorded promotional messaging. Example: have you ever gotten a random phone call and then answered the call, only to be greeted with a recorded message…“Congratulations, you are only 14 days away from earning an extra $10k per week on full autopilot, with no work or effort on your part, just hit number 1 now to be transferred to your free money.”The poor sucker that is stupid enough to press number 1 is transferred to a call center in the Philippines where the telemarketing agent garbles through a script in broken English…guaranteeing easy profits. The Philipino agent asks for an email address which triggers an avalanche of fraudulent email messages, follow up phone call recordings, and invitations to join Steve Dewitt for his exclusive money making webinar.

The nuttiest and most egregious aspect of this pyramid scheme is that Steve DeWitt actively and aggressively recommends that investors do any of the following methods to raise the money needed to join the pyramid scheme:

To hell with the potentially negative financial repercussions of borrowing against the value of your car, or selling a life insurance policy, or borrowing from a Check Cashing Advance company. None of that matters because once you get plugged into Steve’s amazing financial pyramid, all your money problems are officially over. Your only problem is finding enough mattresses in which to stash your cash, or a bank with a large enough vault to accept the truck-loads of $100 bills.

Obviously, I am not fan of Steve DeWitt. The guy is a crook of the highest magnitude. The kind of guy that would steal your grandmother’s jewelry. One of the worst. After this review is posted, of course, he will close down Your Trading Day and reappear later with a new website. Like a herpes rash, he just flares up and reappears later, and there is nothing you can do about it.

Thanks for the many readers that have been actively tracking this con artist. Keep on his trail. When the next scam pops up, I will be back to write another delightful story.

Once again, thanks for reading and don’t forget to leave a comment below.