Thanks for reading today’s review of Millennium-Traders.com

What’s Millennium-Traders. com? Surprisingly, the Millennium-Traders are from the trading instructional industry since 1999. The price of these trading rooms are 299 per month, for every individual trading area. There’s not any free trial. But, there’s a 1 week trial which may be obtained for $10 for every individual trading area. 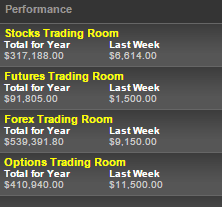 Another thing I found interesting is that Barry claims to have produced these trades with only 100 shares per trade. If you are reading this, and already feeling like this is “too good to be true”, then you are definitely on the correct path. In fact, I have a hard time believing that any sane minded individual would believe any of this nonsense.

First of all, allow me to say there is not any live trading graphs. No trading DOM, no trading in the graphs, without any live trading account clearly attached to some observable section of the stocks chat space. Actually, what you may see is a lengthy list of shares which Barry is”Viewing”. However, you will never see or hear Barry ever making an entry price. Instead, what you will hear is Barry proclaiming that he is now taking profits on one of the stocks that he is watching. So what exactly is Barry doing? This is a very common slight of hand component to this charade…Barry simply waits for a stock to move and then hollers, “See, I told you so! I knew that stock was going to move!” Then he posts a winning trade on the screen and the viewers are supposed to simply trust that Barry actually took the trade.

At the end of these daily, three hour shit shows, I emailed Barry and asked for proof that he took these trades. No response. To add insult to injury, every evening when Barry publishes the official track record…mystery trades would magically appear. Usually 5 or 6 trades would be mysteriously placed inside of the official record, and of course none were losers. He seems to have a daily goal of about $2,000 in profits and just makes this stuff out of thin air.

What is so incredible about this crook is that he seems to have absolutely no sense of shame in what he is doing. This whole trading record is just made up on the fly. I find it incredable that anyone would take this guy serious about anything. Maybe drinking beer, eating barbeque, and hunting alligators…but trading? I mean really folks, look at this guy. He claims to have made $317,000 so far in 2015. The world of trading educational providers has officially gone mad.

Well, if you liked Barry’s trading room, then you are going to really enjoy the futures day trading room moderated by his wife, Jeannie Ogline. Have a look at this lovely critter. A quick review of her futures day trading record places her in the realm of truly amazing, maybe one or two losses each month. But fantastic profits are to be had by following this lovely trader. So how does she pull the scam? The same way Barry pulls his scam. She says that she is “Watching” the YM, ES, or NQ, and then after the market moves she starts hollering how she got yet another winner. What is so amazing is how she pulls these big profits in sometimes only a few minutes each day, and then proclaims another victory for the Millennium Traders and how they are the worlds most successful trading room. The whole time I am watching and reading the commentary from the screen chat, I was quite literally sickened that anyone would be fooled by this shit show.

Reyna, my Filipina assistant that recorded the futures day trading chat room was beyond mortified and she quickly started chittering in Tagalog, which is the official language of the Philippines. Whenever Reyna starts talking in Tagalog, then I know she is having a hard time coming up with the proper English words to describe the hilarity of both Barry and Jeannie.

After spending a terrible week inside of the Millennium Traders chat rooms, and being forced into watching rerun Camtasia recordings, I felt like I had spent a week wading through a combination of raw sewage and dog feces…I literally needed to scrub my body in the shower, and drink a few margaritas to dull the horror show that I had just witnessed. Of course, I could of stayed another week and reviewed the Forex Day Trading Room which proclaims to have earned over $539,000 thus far in 2015. Or I could of spent a week in the Options Day Trading Room which proclaims to have earned over $410,000 thus far in 2015. But I am afraid that if I spent even another moment reviewing this fraud infused shit show that my mind would be irrevocably damaged. My current prescription of 20 milligrams of Paxil antidepressant would not be enough to keep me sane. But by all means, I recommend that if any brave soul wants to test the limits of this visual torture, then please be my guest and subscribe.

This trading service embodies all that is wrong in the trading educational industry. Pure fraud, from top to bottom. In fact, I would go beyond and say that this is beyond pure fraud, I would call it pure evil. How do these people even exist in a modern civilized society? Do they have children, and how would people like this raise their children? Do they have normal, trusting relationships? Or do they live in an old run down, filthy trailer home,  seclude somewhere in the middle of the Florida swamp?

Its all so crazy and odd to me. In their own minds, how do they justify this behavior? Do say to themselves that because they were taken advantage of, that they are simply doing what was done to them? Do they laugh at the naivety of humans? Do they understand the ugliness, chicanery, and deceit that they freely dispense upon the world? How do they feel knowing that honest people, with honest hopes an aspirations of bettering their lives are being lead into their slaughterhouse of deceit?

Truthfully, I did not want to write this review. These people are so ugly and horrible that by simply expressing the reality of what they are doing deeply sickens me. However, I was able to do a little more digging and the truth of these two are even more perverted that just the fraud of Millennium Traders. Apparently, they are heavily involved in pornography. A deep web search reveals that Jeannie also runs a site called Waveside Entertainment. What is Waveside Entertainment? Its a conglomeration of websites offering jobs in live prostitution, live webcam porn, sex shows, all manner of weirdness.

Getting a job at Waveside Entertainment

Well that is it for now. Even should you not agree with me, then your voice will be heard.